IFLA Europe, European Region of International Federation of Landscape Architects - was established on 4 April 1989 as European Foundation for Landscape Architecture in order to specifically address European landscape architectural educational and professional issues.It was formed by representatives of 12 National Associations – Belgium, Denmark, France, Germany, Italy, Luxembourg, The Netherlands, Portugal, Spain, United Kingdom, plus Ireland and Greece whose representatives were not present at the meeting.

Today IFLA Europe has 34 members and represents more than 20.000 landscape architects across Europe!

This period represents the initial development of professional bodies representing the emerging profession of Landscape Architects in many European countries and non-European countries. Many of these bodies introduced structures and controls for the education and practice of the profession. A close relationship was subsequently built up between the professional bodies and education establishments which at that time were mostly associated with universities.

In 1948 the International Federation of Landscape Architects (IFLA) was founded in Cambridge, England with Sir Geoffrey Jellicoe as its first President. It represented 15 states from Europe and North America. Later, in 1978, the IFLA’s headquarters were established in Versailles, France. The present headquarters of IFLA are in France. IFLA currently represents 76 member professional associations from Africa, the Americas, Europe, Middle East and Asia Pacific.

1965 – 2012 Recognition of the profession by the United Nations Education, Scientific and Cultural Organisation

In 1965, IFLA was first admitted to “Category C” of the United Nations Education, Scientific and Cultural Organisation (UNESCO).[1] In 1970 IFLA advanced to “Category B”. Finally, in 1987, after many years of discussion with UNESCO and after intensive collaboration, especially with the Division of Cultural Heritage, IFLA was admitted to “Category A”, thus achieving an important landmark for the profession. In July 2012 the IFLA/UNESCO Charter was agreed for landscape architecture education. It expressed the wish to:

– improve the quality of life for communities and all the inhabitants and users;

– promote an approach to landscape planning and design interventions which enhances social sustainability, cultural and aesthetic needs, and the physical requirements of people;

– employ an ecological approach to land use planning, design and landscape generation that ensures sustainable development of the built environment through the appropriate integration of biological, land, water and atmospheric systems;

– recognise the role of public realm landscape as a place for social and cultural expression interchange and make these accessible to all individuals and communities;

– promote equity through work with disadvantaged groups or communities and the development of solutions that are affordable and accessible to the broad population.

This charter has helped establish the professional scope of landscape architects and the objectives of their training. These include the interdisciplinary nature of landscape architecture, which encompasses the humanities, natural and social sciences, technology and the creative arts, without forgetting the context of public, social and environmental policies, which help to establish an ethical framework for professional decision making.

1968 Recognition of the profession by the International Labour Organisation (ILO)

In some states, the profession is still very closely associated with the study of architecture. Paradoxically though, as is the case in France, Italy and Spain, architects still dispute the use of the title of landscape architect. However, 50 years ago, in 1968, the profession of landscape architect, having by then already existed in Europe for 50 or so years and a hundred years elsewhere, was officially recognised by the International Labour Organisation (ILO) in Geneva in a chapter entitled “Architects and Town Planners”. In the most recent edition of ISCO 08, the International Standard Classification of Occupations published by the ILO (2012), landscape architects are classed in group 2162, next to Building Architects in group 2161. On 29 August 1987, the International Federation of Landscape Architects (IFLA) was admitted by UNESCO as a non-governmental organisation (NGO) with an official working relationship with UNESCO.

In the same year, 1987, the European Commission decided that sectoral directives in distinct professions were no longer viable; the process of achieving them had been too lengthy and hugely inefficient. This resulted in Directive 89/48/EEC being issued on a general system for the recognition of higher-education diplomas awarded on completion of professional education and training of at least three years’ duration. The national professional associations representing the 12 member states of the European Economic Community at that time recognised the immediate need to come together more formally, to harmonise both professional training and practice in the field of landscape architecture. The result was the establishment of the European Foundation for Landscape Architecture (EFLA) in 1989.

Other organisations rapidly formed around EFLA, including affiliated professional bodies representing landscape architects from European states that are not members of the European Union, as well as other organisations, bringing together both students and schools. The European Council of Landscape Architecture Schools (ECLAS) was convened by the Berlin Technical University in 1989. In the same year, the European Landscape Architecture Students’ Association (ELASA) was formed, the principal objective of which was “to increase the possibilities for collaboration and exchange between students of landscape architecture throughout Europe, by means of improving the circulation of information and ideas”.

One of the principal objectives of EFLA was to establish a common base for the mainstream professional training of landscape architects and to support this with a network of recognised schools throughout Europe. This was assisted by a Schools Recognition Panel which was established to both help with the development of schools of landscape architecture and to regulate their performance and adherence to the standards set by EFLA.

Finally, at the beginning of the 2000s, the world international body, the International Federation of Landscape Architects (IFLA), underwent several important structural changes and EFLA became the European Region of the International Federation of Landscape Architects (IFLA Europe). This succeeding organisation effectively inherited the statutes,
regulations and legal status of EFLA as a non-profit making organisation registered under Belgian law. IFLA Europe comprises 34 national representative organisations. As a non-governmental organisation, it not only aims to defend the landscape architecture profession, recognising excellence in professional training courses and promoting the best practice operations in all member states, but also strives to influence and enhance the quality of the landscape.

In recent years, IFLA Europe has contributed to this process by providing documents on several topics: Landscape Democracy (Oslo Resolution 2014); Cultural Landscapes (Lisbon Resolution 2015); Urban Landscapes (Brussels Resolution 2016); Migration (Bucharest Resolution 2017), Climate Challenges (London Resolution 2018) and Landscapes as Shared Memories (Antalya Resolution 2019). The objective is to encourage a dialogue not only at European level but also between professionals and citizens alike, to promote actions in favour of landscape.

A charter was agreed and adopted by IFLA Europe’s General Assembly at its meeting in London on 9 September 2018. This Charter not only brings together in a single document the details of the organisation and the governance of the body, but also the core requirements for professional training, including reference to the School Recognition Panel, public and private practice, the responsibilities of liberal professionals, intellectual property, professional independence and probity, and also states the organisation’s close reference to the objectives of the European Landscape Convention.

Landscape architecture is defined as “the profession that applies aesthetic and scientific principles to the analysis, planning and management of both natural and built environments” (as it is also defined by the European Landscape Convention).

We believe that formally recognising this professionally qualified person would be a joint responsibility of national governments, the Council of Europe and the European Commission, working in conjunction with the national associations of landscape architects.

However, in this last respect, as the Charter states, there is also a responsibility for national professional associations to play their part in this process by becoming, if necessary, self-regulatory bodies, involved in professional training and practice, controlling, monitoring and sanctioning, where necessary, the activities of their members, in order to ensure probity, quality of service and consumer protection for the benefit of the public and the clients they serve. 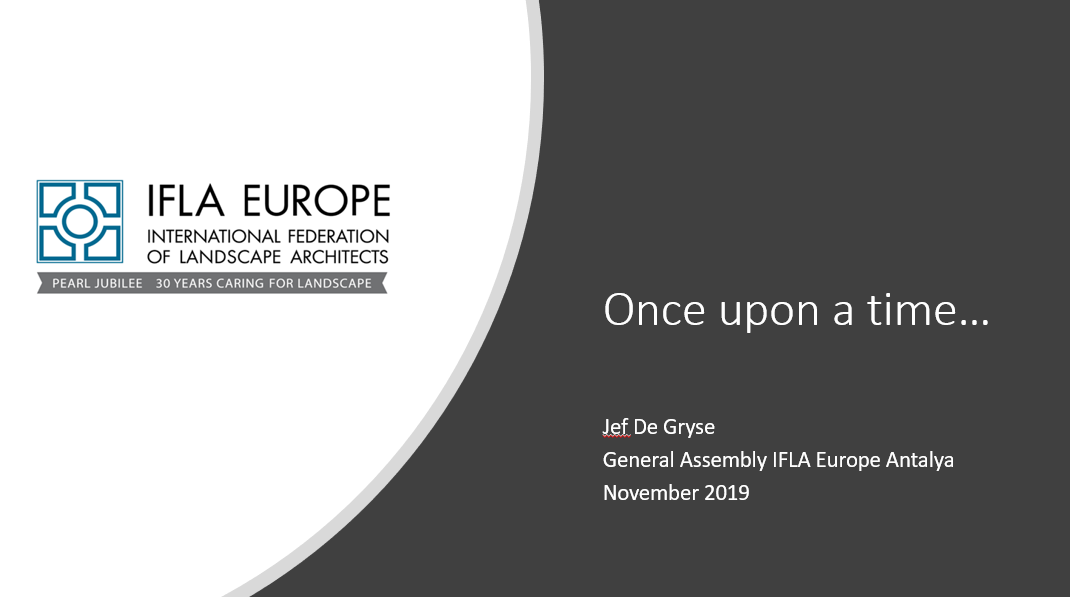 Jef De Gryse Once Upon a Time