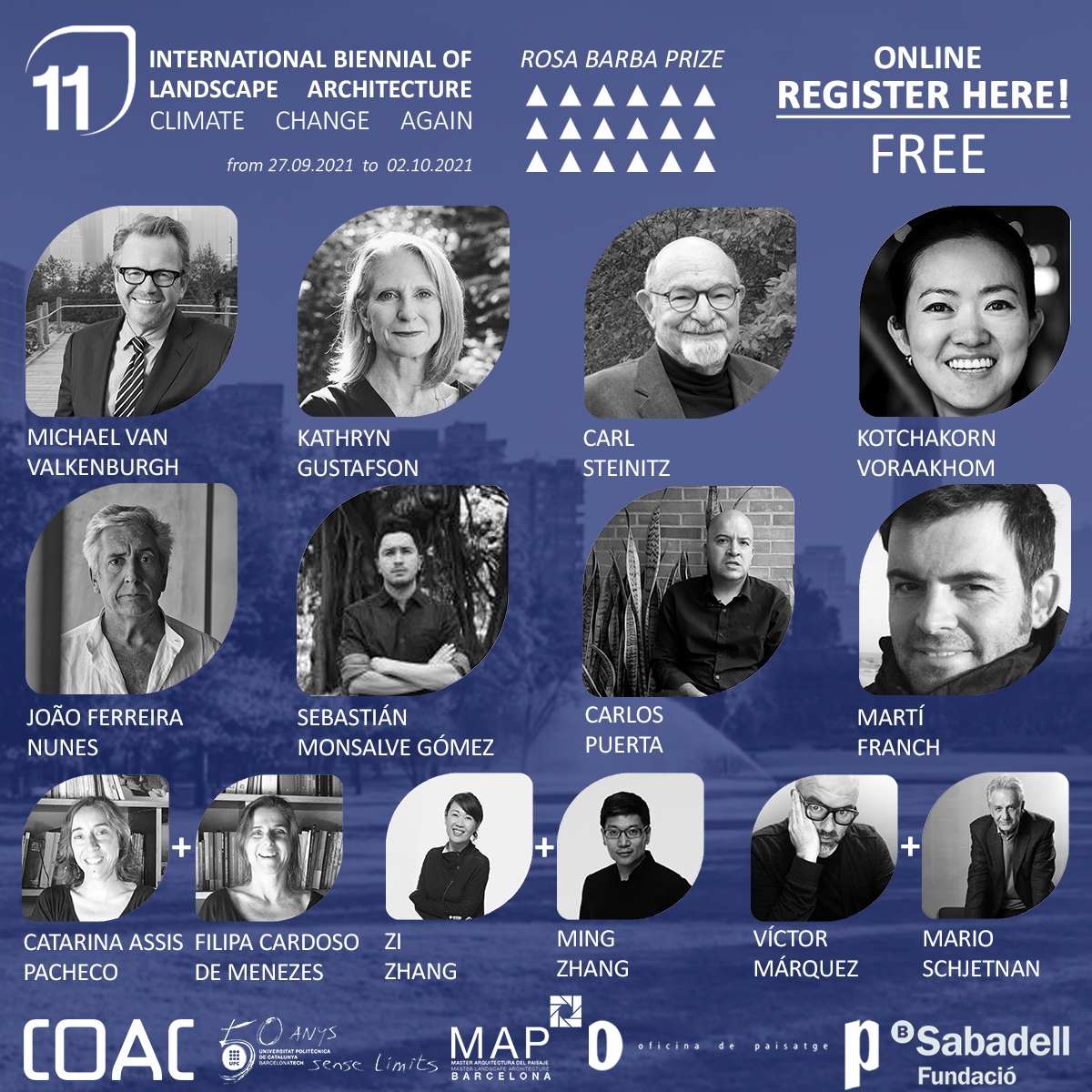 • The project Medellín River Parks, by Sebastian Monsalve Gomez and Juan David Hoyos Taborda, has received a Mention from the Jury.

• Since September 27th, 42 lectures have been presented on the reality of landscape and the future in the current climate emergency context.

The Brooklyn Bridge Park in New York designed by Michael Van Valkenburgh has been proclaimed winner of the Rosa Barba International Landscape Prize2021, which is awarded within the symposium of the 11th International Biennial of Landscape Architecture Biennial, Barcelona, which took place from September 27th to October 2nd. Designed and built over the past 20 years, Brooklyn Bridge Park spans 85 acres along 1.3 miles of the East River waterfront.

The project Parques del Río Medellín, by Sebastian Monsalve Gomez and Juan David Hoyos Taborda, has received a Mention from the Jury. An urban park made up of quality Public spaces that integrates Medellín River corridor, the structuring systems of Medellín and the Metropolitan Area with urban activity.

The Rosa Barba International Landscape Prize consists of an economic reward of 15,000 €, is awarded to a landscaping project built during the 5 years prior to the symposium date, and is publicly presented during the Biennial celebration. The selected projects are published in the Biennial Book-catalogue, are part of an exhibition and are included in the Biennial’s online archive. Over the years, this award constituted a barometer of high interest of trends, social concerns and professional contributions from the world of landscaping regarding the needs and emergencies in relation to care and intervention in the territory. The International Jury of the 11th Biennial is composed of Esteban Leon (head of the program for the elaboration of resilience profiles of the UN-Habitat cities); Cristina Castelbranco (landscape architect and doctor in History of Art of Gardens at the University of Lisbon); Kongjian Yu (landscape architect, urban planner with a PhD in design from Harvard University); James Hayter (landscape architect and urban planner from Harvard University) and Julie Bargmann (architect behind regenerative and collaborative landscapes).

The finalists of the Rosa Barba International Landscape Award for this edition have been:

On the other hand, the International Prize of the Schools (remunerated with 1.500 €, which also includes the exhibition of the projects and the inclusion of said projects in the Biennial website) has designated the City College of New York the winner of this edition school’s prize. The 8 finalists of architecture schools have been Leibniz University Hannover (Germany); University of Technology Sydney (Australia); Harvard University Graduate School of Design (United States); City College of New York (United States); School of Architecture Urban Planning Construction Engineering Politecnico di Milano (Italy); Amsterdam Academy of Architecture (the Netherlands); TUDelft (the Netherlands) and Huazhong University of Science andTechnology (China).

Closing ceremony at t he Palau de la Música The winning projects of the Rosa Barba International Country Award and the International School Award will be announced to the public on October 1 at 7:00 p.m. in the course of the closure act of the 11th Biennial scheduled at the Palau de la Música. The event will count on the presence of the President of the Consejo Superior de Colegios de Arquitectos de España (CSCAE), Lluís Comerón; the Dean of the College of Architects of Catalonia (COAC), Assumpció Puig; the Vice-rector of Architecture, Infrastructure and Territories of the UPC, Jordi Ros; the manager of the Metropolitan Area of Barcelona (AMB), Ramon Torra; the general director of the Territorial and Urban Planning Department of the generalities of Catalonia, Agustí Serra; and the Provincial Council of Mobility, Natural Spaces For more information, photos and interviews:Oficina de la Biennal de Paisatge biennal@coac.net WEB: https://landscape.coac.net/en

For more information about the event please visit Barcelona Biennale