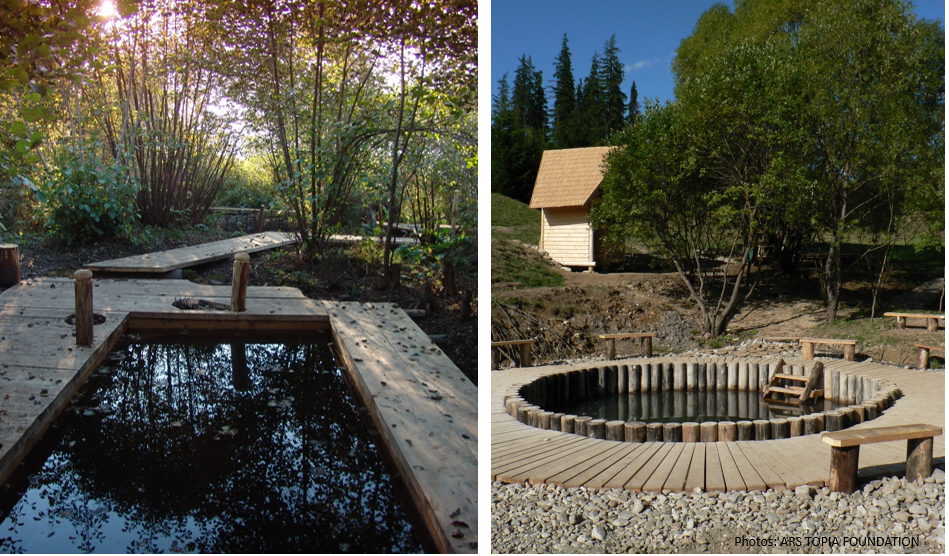 Springs and medicinal water form the most important natural resources in the Carpathian Basin. The healing power of the mineral springs has been known for centuries by locals who built simple wooden pools and gas baths called mofettas. In the 19th century, elegant spas were born at several places and bottled water was distributed even to distant places in Europe. The upheavals of the 20th century destroyed and erased the memory of this colourful spa culture. The wooden constructions of the traditional spas disappeared, nature reconquered their sites and the waters were also gradually forgotten about.

The idea of reconstructing vernacular spas was raised during a regional development project in Transylvania. The working method was based on the concept of the „kaláka”, a co-operative voluntary work that serves as a source of mutual assistance between people in the village. The renewal of dozens of small vernacular baths was launched by landscape architects from the Hungarian Ars Topia Foundation more than 20 years ago.

When designing, they start with analysing the surroundings, forming a concept keeping in mind the needs and prospects of the locals. Even the first drawings incorporate the spirit of the location. That is how a widely accepted art piece in the landscape can be born. The baths are made of natural materials and require maintenance. In the past, they have been repaired or some parts completely refurbished every five to eight years. The experience shows that the further development and up-keeping of the baths depend on the willingness of local communities. Where the community does not organise the maintenance works, nature reconquers the area after a while, until another group won’t come…