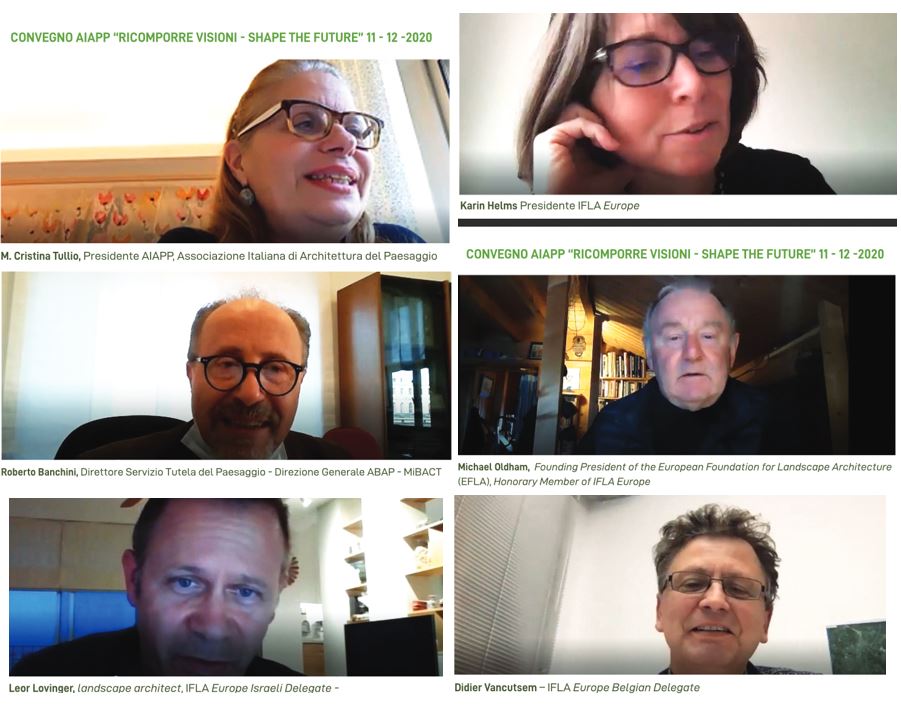 For its seventieth anniversary, AIAPP has identified CLIMATE CHALLENGES as the theme of the year, highlighting how much landscape architecture projects offer strategic solutions to contrast the main critical issues of recent years, including the health emergency we are facing.

Today, the need for and the benefits deriving from green spaces are strongly perceived, while the places we “live in” continue to be increasingly vulnerable due to social and environmental problems - and consequently climatic ones - that characterize our daily lives.

The European plans under discussion, which aim at the continent’s economic rebirth, identify precisely such critical issues as situations to overcome and as the objectives on which to experiment new operating models.

Landscape design interventions (by their nature inexpensive / quick to implement / with immediate ecological and quality repercussions) can / must be a tool capable of making urban spaces more performing (healthy, welcoming,functional, with adequate air quality), safeguarding and improving the equilibrium of territorial ecosystems.

Landscape architecture projects can, in fact, determine different types of benefits and repercussions: they allow micro-climatic control, improving air quality, the absorption of fine dust and the regulation of urban drainage; they stimulate / develop organic farming; they work for the conservation/enhancement of biodiversity; they insert peri-urban buffer strips; they act for hydro geological consolidation; they develop soft mobility by integrating it with some aspects listed here, etc. In responding to functional and landscape
needs, therefore, they determine the improvement of the quality of life of the inhabitants and create new working opportunities and management and maintenance of the territory, as indicated in the European Landscape Convention.

To disseminate and stimulate reflection on these issues, AIAPP organized a public conference on 11 December 2020 entitled: “Recompose Visions - Shape the future”, to celebrate its 70th anniversary and the 20th anniversary of the signing of the European Landscape Convention.

The event aimed to offer a reinterpretation of the past decades, in light of the changes and critical issues in progress and, above all, it wants to help identify operational tools to achieve the epochal, economic, ecological and social change that European programs could allow.

The presentation of Michael Oldham summarised the establishment of the Council of Europe in 1949 by the Treaty of London in 1949 and the creation of the European Union by the Treaty of Rome in 1957 and the confusion that exists between the two bodies. The Council of Europe (CoE) was established on three fundamental pillars – Human Rights, Democracy, and the Rule of Law.

Michael Oldham, who is a member of IFLA Europe’s CoE Working Group presented a paper to the 19th CoE Workshop in Brno in September 2017; he was a member of the jury in 2018 for the Landscape Alliance Landscape Awards and presented a paper on ‘Professional Recognition’ to the 2019 Conference. He has also contributed to some of the CDCPP and NGO meetings. IFLA Europe CoE WG has now been commissioned to present a paper to the 2021 Conference on ‘Urban Landscapes and Climate Change:the contribution of Landscape Architects to improve the quality of life.’

This year also sees a new initiative being initiated by the CoE, under the heading of Democracy, on ‘Human Rights and the Environment’. This aims to protect the environment using Human Rights Law. A consultation paper has been prepared expressing concern that non-recognition of the profession, restricting its access to certain areas of work, reluctance to allow landscape architects to use their proper title, and denying the public access to their expertise, may all contravene the European Convention on Human Rights.

Ever since the dawn of history, humans possess an innate tendency to seek connections with nature and other forms of life. Urbanization, the increasing density of cities, the intensity of life associated with these, and the outcome of COVID 19, further echo this desire and need for a healthy and mentally balanced life. In this lecture, Leor shared from his studio’s experience in ‘Nature Inclusive Designing’ as a strategy to address climate change and enhance biophilia. The projects ranged in scale and included a 30 hectare bird park, a 6500 sqm public building with a large living roof, to a 400 sqm garden and urban oasis in Tel Aviv. The projects engaged urban, rural and agricultural settings.

Landscape Architects are the appropriate professionals to address the current changes in society and territory. We need to work all together to achieve the profession recognized; IFLA Europe is here a key partner, together with national organisations. EU programs do offer a broad spectrum of opportunities to become more visible. A clear recommendation is to work in crosscutting way and in partnership with other professions.