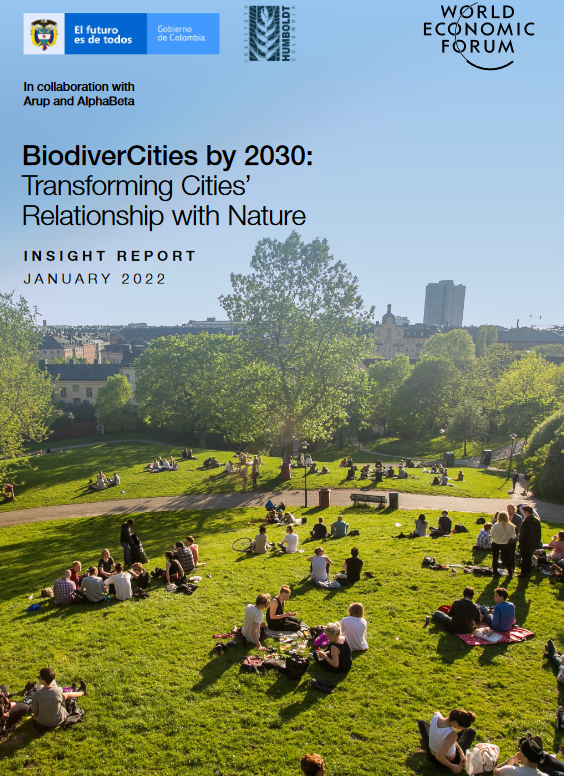 Cities are the engine of the global economy - contributing 80% of the world’s GDP – but their exponential growth in recent decades has come at the expense of nature. The built environment has grown by two-thirds in the first 12 years of the 21st century, leading to the degradation of local ecosystems and the loss of habitats. Urban areas are also responsible for over 75% of global carbon emissions, accelerating climate change which drives further nature loss.

Urban leaders around the world have the power and responsibility to transform cities and lead the way in tackling the interconnected biodiversity and climate crises.

This report provides a vision for cities of the future and the needed systemic shifts to develop BiodiverCities that place nature at the heart of decision-making and infrastructure investments. The report also sets out how public and private urban leaders can utilise nature to both reduce the impact of their cities on biodiversity, increase their climate resilience, and secure significant economic benefits.

- The World Economic Forum is calling on the world’s cities to transform their relationship with nature and lead the way in tackling the interconnected biodiversity and climate crises.- A new report, BiodiverCities by 2030, sets out why and howpublic and private urban leaders must take action touphold their cities as‘living systems’ whose economic, social and ecological functions are in balance.

- ‘Nature-positive’ investments- such as Nature-based Solutions for infrastructure or returning land to nature - could create more than 59 million jobs in cities worldwide and generate over $1.5 trillion in annual business value by 2030. The analysis finds that spending $583 billion on interventions that enhance nature and reduce urban impacts on biodiversity can secure significant economic benefits as cities become more resilient, liveable and competitive.

- In addition to setting an inspiring vision for cities to live in harmony with nature by 2030, the report provides actionable solutions and stipulates the shifts required for cities to put nature first in their decisions on infrastructure, governance, economy, health and wellbeing.

- While cities are the engine of the global economy - contributing 80% of the world’s GDP -their exponential growth in recent decades has come at the expense of nature. Unchecked urban expansion is undermining nature’s critical contributions to society - such as air quality, flood and drought prevention, and food security.

-44% of global GDP in cities ($31 trillion) is estimated to be at risk of disruption from nature loss, and more than 1.4 billion people living in the world’s largest urban centres are threatened by natural hazards. With cities projected to host three quarters of the world’s population by 2050, urban leaders and decision-makers must prioritize nature in their investment decisions to both improve the resilience and liveability of their cities, and to secure a sustainable future for humanity.

The business case for BiodiverCities

- Embracing nature-positive interventions is not just an imperative but also an opportunity for urban leaders and decision-makersto build more resilient and competitive cities.

- By investing in Nature-based Solutions (NbS) for infrastructure - such as prioritizing reforestation to smother heat waves or flooding from storms - cities can derive significant benefits. NbS for infrastructure are 50% cheaper than ‘grey’, man-made alternatives and deliver 28% greater added value in terms of direct and environmental benefits. With less than 0.3% of current spending on urban infrastructure going to NbS, there is a significant investment opportunity for cities to tap into – estimated to reach up to $113 billion annually in 2030.

- Cities can also gain from returning land to nature –for example repurposing or rewilding grey infrastructure or encouraging the shared use of existing spaces for working and living. Such ‘land-sparing interventions’ could be worth an additional $469 billion in annual investment opportunities in 2030, and generate additional revenues for cities as they become more attractive to residents and tourists.

- In total, this $583 billion investment opportunity in nature could generate $1.5trillion in annual business value for investors by 2030, and possibly significantly more with the introduction of new technologies and markets. This investment could create more than 59 million jobs by 2030 – equivalent to 1.5% of the projected global labour force.

Three shifts to enable cities to live in harmony with nature

- Realizing the BiodiverCities by 2030vision requires three shifts in urban development models, and the contribution of all parts of society. Put together these shifts form a roadmap that urban leaders, working closely with public and private decision-makers, can follow to transform to unlock nature’s benefit.- Firstly, cities must embrace a ‘systems approach’ to urban governance that considers the needs of all stakeholders, accounts for the value of natural ecosystems, and moves away from legacy models in which decisions are driven by cost efficiencies and ad hoc urban planning. This shift requires ownership by top levels of government, strong coordination and leadership at city level, and policy that fosters innovation and holds the private sector accountable for its impact on nature.

- Secondly, cities must reintegrate nature into their spatial planning decisions, and restore the ‘natural layer’ as the backbone of their development. This means preserving natural habitats within and around cities, renaturing degraded land (through, for example, community-based tree planting) and ‘growing smart’ by embedding nature in new or upgraded infrastructure, such as green corridors along high streets and green roofs on new buildings.

III.About the report and the BiodiverCities by 2030 initiative