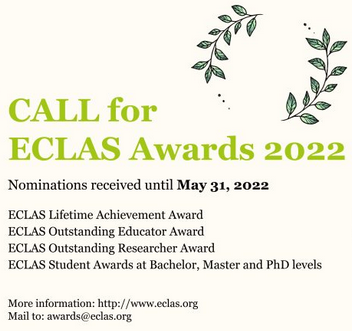 An overview of ECLAS awards from previous years can be found here.

ECLAS are looking for nominations in the following categories:

Please complete the form and send it, together with the supporting material (<8MB), to ECLAS Secretary General – Frederico Meireles Rodrigues by e-mail to awards@eclas.org to reach him by 31 May 2022.

A nomination should comprise a completed nomination form, with a short motivation for the nomination (maximum 200 words), the nominee’s curriculum vitae, a biographical sketch that summarises the highlights of the nominee’s career or achievements (3 pages maximum) and evidence of this achievement (maximum 6 pages and/or portfolio panels).

The purpose of ECLAS is to foster and develop scholarship in landscape architecture throughout Europe by:

ECLAS will be given the copyright of all text, photos and other material that has been provided for the nomination of the award winner for the purposes of publicising the award.