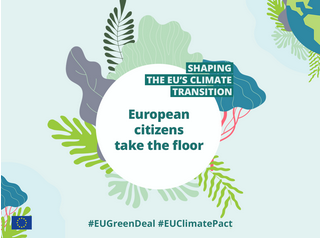 On 29 April, citizens from across Europe will join the Executive Vice-President of the European Commission, Frans Timmermans, to discuss the EU’s green transition. The key topics up for discussion are energy, transport, food and consumption. Attendees, including hosts of some Climate Pact Peer Parliaments, will be encouraged to share citizens’ concerns and recommendations while also discussing the trade-offs they are willing to take to ensure that our planet is habitable for generations to come.

The conversation will revolve around what the Climate Transition looks like, according to European citizens, in terms of energy transition, sustainable mobility, and food and consumption.

This event represents a key moment for citizen-engagement initiatives launched by the European Commission to foster an open and constructive dialogue on the Climate Transition.

The objective of the event is to learn about citizens’ concerns, views and recommendations, and the trade-offs they are willing to accept for the climate transition. The results of both processes will not only reach the European Commission, but also feed into the Conference on the Future of Europe (CoFoE).

Watch the debate online from 10:00 CEST

Tune in on the Conference on the Future of Europe website to watch the event live.

Other Action 9 “Support to the engagement of European Citizens in the transition to the European Green Deal (EGD),” funded through the Horizon 2020 European Green Deal Call, set up 27 representative national-level citizen debates – one per Member State – to collect ideas and recommendations from across the Union, in order to elaborate “a roadmap for the climate transition with the active participation of citizens”.

Here you will find more information.

DG CLIMA invited citizens across Europe to have semi-structured, self-organised climate debates in familiar environments, the so-called Peer Parliaments. As part of the European Climate Pact, hundreds of private small group deliberations have taken place and their hosts reported the outcomes back to DG CLIMA via a web platform.