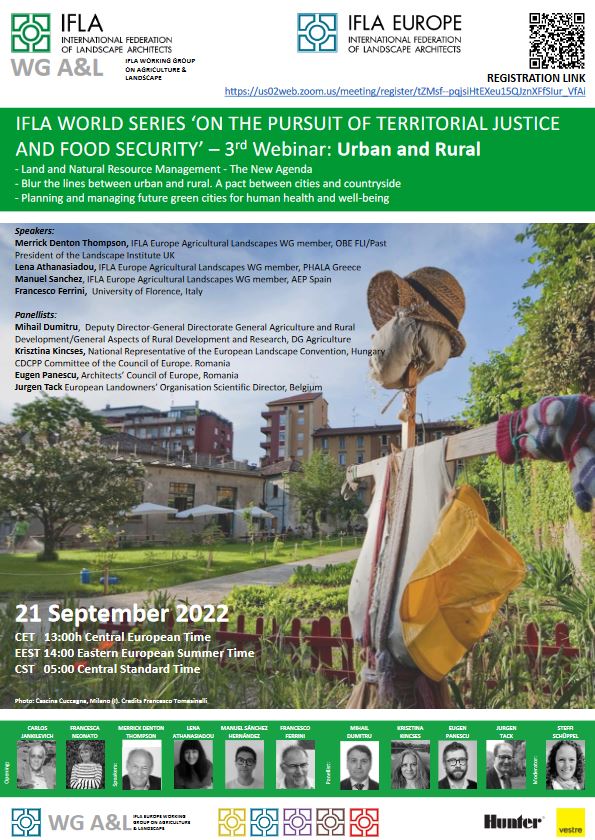 During this webinar a call on all nations to transform the way land and natural resources are managed was sent. The driving forces demanding such changes include climate change, extinction of species, food security, the lack of resilience and the health and wellbeing of everyone.

The conference held on the 21st September
2022 attracted delegates from all over the world and explored:

· The high proportion of food production systems worldwide that are not sustainable, emitting a high proportion of climate changing gases.
· The irresponsible science that has destroyed wildlife across the world, destroying the microbial health of our soils upon which our very existence depends.
· The need to repurpose the landscapes of our towns and cities to make them more resilient and reconnect the worldwide public with nature to improve health and wellbeing.
· Special attention to be given to the urban fringes to deliver multi-functional landscapes.

The conference concluded on a more optimistic note by pointing out that changes in land management could harness the power of natural systems, rather than suppressing them, to reverse the drivers of climate change and to secure sustainably produced food for everyone. The conference celebrated the contribution the Landscape Architecture Profession can make in transforming land and natural resource management through policy changes, design and delivery – in both our urban and rural landscapes.

Francesca Neonato, Chair of the IFLA Europe Working Group Agricultural Landscapes, member of AIAPP Italy, introduced the webinar focus on what can be the mutual benefits that city and countryside can have in a fruitful collaboration for quality landscapes and for the well-being of people.

Merrick Denton-Thompson, IFLA Europe Agricultural Landscapes WG member, OBE FLI/Past President of the Landscape Institute UK presented “The New Agenda
for Land and Natural Resource Management”, in which he evidenced how the CAP supported food production at time of need, giving certainty to the farming community and encouraging a raft of scientific and technical agricultural development, but with very high costs in terms of climate change gas emissions, polluted soils and rivers. Also the loss of biodiversity and distinctive agricultural landscapes. Through an example of regenerative farming in UK, he explained a new science based system of agriculture that can help to place food production on a more sustainable basis. This system reverses the processes of Climate Change and, taking into account the European Landscape Convention, a new governance system is possible through a collaboration across the public, private and voluntary sectors to secure a new approach to land and natural resource management.

But the truth is that what we find on the outskirts of cities is not pristine nature, but farmland and infrastructure that have traditionally fed the city.These productive fields are beginning to be understood as a space of high environmental, productive, cultural or leisure value. Capable of feeding the city beyond its fruits. We presented, in this conference, two projects of interrelation between the city and the countryside in two countries of the Mediterranean basin that share similar characteristics in terms of climatic conditions and traditional crops.

Francesco Ferrini, University of Florence, Italy, presented “Planning and managing future green cities for human health and well-being”. After a better appreciation
of nature, many solutions adopted as mitigations, NbS, etc., are good but not enough to make more resilient the cities. A change of paradigm is asked: it must not be green at the service of the city, but the city at the service of green, to reduce drastically the urban heat islands and the pollution in the cities. So, we need more trees, but they must be planted following a clear strategy, avoid the impacts and preserving natural features by using conservative planning techniques and reducing soil sealing and impermeability using ‘sponge cities’ as a model. Species provide ecosystem services, that can be measured in terms of reduction of the pollution to make cities better places to live.

In her closing remarks, Francesca Neonato the Chair of IFLA’s Agricultural Landscapes Working Group ‘emphasised the importance, worldwide, of the issues we have discussed today and let us hope that this is the start of an on-going discussion to stimulate a collaborative approach to deliver this exciting new agenda?’

During the panel discussion, moderated by Steffi Schüppel, Mihail DUMITRU, Deputy Director General of Agriculture, confirmed that sustainable food production is the new focus for Europe’s Common Agricultural Policy. Jurgen Tack, the European Landowners’ Organisation Scientific Director, emphasised the crucial role of his organisation in supporting policies that encourage an agri-ecological approach. How to improve the contributions between city and country and how ready citizens are to recognize the benefits produced by a ‘healthy’ agriculture has been at the center of the debate with Krisztina Kincses, National Representative of the European Landscape Convention, and Eugen Panescu, Architects’ Council of Europe.

The recording of the webinar is available on IFLA Europe Youtube channel https://youtu.be/hF_kubevI14

It is formed by 34 National Associations of landscape architecture as members representing over 18.000 Landscape Architects across Europe.

IFLA Europe’s holistic vision is to contribute to international discourse, shaping and disseminating European initiatives, facilitating the exchange of information, whilst promoting excellence in professional practice, education and research.