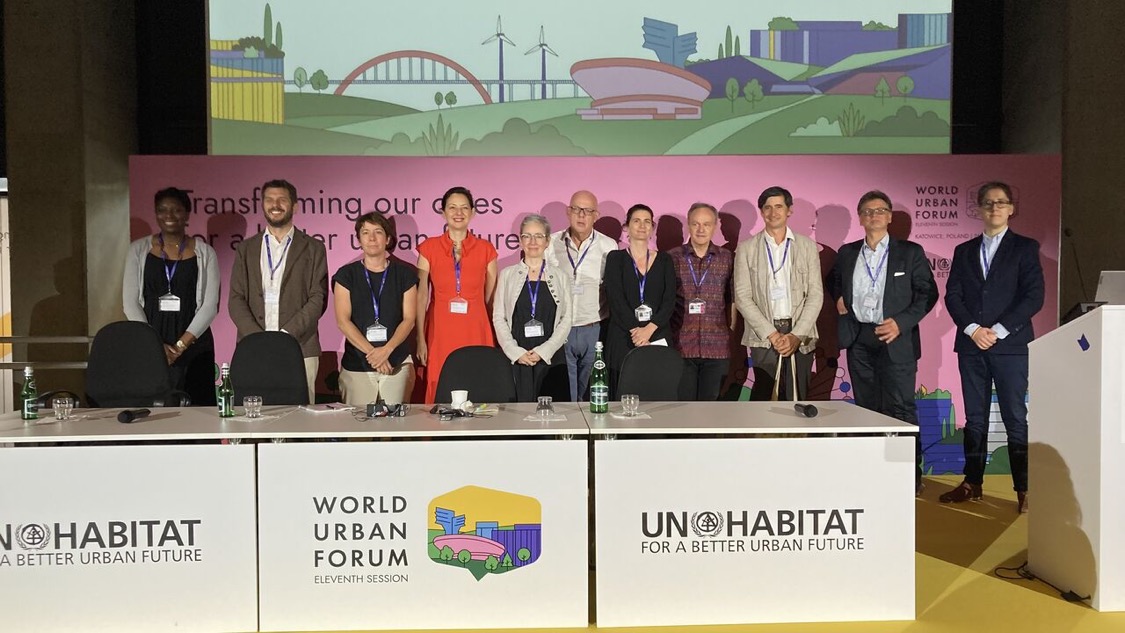 The World Urban Forum is the premiere global conference on sustainable urbanization held every two years with the aim of raising awareness around sustainable urbanization, improving the collective knowledge of sustainable urbanization through inclusive open debates, sharing of lessons learned and the exchange of best practices and good policies, and increasing cooperation among stakeholders. Established in 2001 by the United Nations, it examines one of the most pressing issues facing the world today, rapid urbanisation and its impact on communities, cities, economies, landscape, climate change and policies.

The WUF11 was co-organized by UN-Habitat, Poland’s Ministry of Development Funds and Regional Policy and the Municipal Office of Katowice: after five days of intense debate and discussion under the theme “Transforming our cities for a better urban future”, with 400 events featuring 700 speakers from government, civil society, communities, academia and the private sector, the Eleventh Session of the World Urban Forum closed 1 July 2022. New friendships and partnerships were formed, new agreements reached, and bold ideas formulated among the attending 17,003 people from 155 countries.

IFLA Europe and IFLA World were active partners of the WUF 11, organising several events and contributing to the general topic with specific contributions. Starting the week with a Networking Event on Monday 27 June, the IFLA Europe event, organised in cooperation with Drees&Sommer, discussed the topic of “Reconnecting with Nature: Landscape Architects at the forefront of the creative and innovative urban transformation”.

Full attendance (around 100 persons, including 20 students from Krakow University and Urszula Forczek-Brataniec SAK Poland and past IFLA Europe Secretary General) experienced a truly lively debate: Didier Vancutsem Vice President Professional Practice introduced the event, IFLA Europe and 5 theses on the role of landscape in our cities, followed by Haris Piplas, IFLA Europe NEB Working Group, Drees & Sommer and his topic of “Challenges of urban reconstruction” in Sarajevo and the cultural landscape identity dimension. Christian Hübel from the City of Mannheim demonstrated the Voice of Cities with its open space strategy and the successful results of tactical urbanism; Cécile Diguet Urban policies and urban development Director at the Institut Paris Region explained how regional landscapes are currently used as reference for the new Regional Plan of Ile de France. And finally, Alexander Shevchenko from restartukraine.io demonstrated how the landscape is going to play a decisive role in the reconstruction of the Ukrainian cities by rebuilding cities in a different way.

The discussants were followed by 3 respondents, identifying the key topics presented: Azmizam Abdul Rashid, Urbanice Malaysia representing South-East Asia, Nicholas You, Guangzhou Institute for Urban Innovation forChina, and Karolina Skowronek, Drees & Sommer, from Poland. All three referred to the key role of landscape and the SDGs, the aspects of landscape acupuncture and co-creation, the urgently needed urban transformation due to climate adaptation, and the importance of landscape architects. After an intensive discussion with the audience, Didier Vancutsem concluded with the slogan of “Put the landscape first” at all levels of urban intervention, transformation, planning and cooperation.

IFLA Europe participated in the Voice of Cities event on “Megacities challenges facing climate change adaptation” Tuesday 28 June: Didier Vancutsem delivered the opening keynote on “Megacities beyond 2050 – towards innovative and resilient solutions”. Panelists from OECD, Bogotá, Buenos Aires, Metrex, Metropolis, Paris, Delhi, Istanbul, and C40 discussed megacities solutions and how mega cities can adapt in the context of climate crisis. This event was the launch of an international working group and series of activities, such as an Urban Thinkers Campus of the World Urban Campaign on Asian megacities in October 22, 6 webinars on specific themes between December 2022 and end 2023, followed by a publication and a presentation of the results during WUF12 Cairo.

IFLA Europe participated also in the Special Session of UN-Habitat on Tuesday 28 June in the presentation of the Publication “The City We Need Now” of UN-Habitat, a global manifesto for the implementation of the SDGs in our cities towards 2030. On behalf of IFLA Europe, Didier Vancutsem made clear in his speech the high importance of the City We Need Now document and the role of landscape architects in the transformation of our cities towards resilience and carbon-neutrality. This was seconded by Marina Cervera Alonso de Medina, who also attended the event.

IFLA Europe attended several other types of events during the WUF, such as networking events, Voice of Cities events, as well as training events. With new partnerships, new friendships and exciting new project ideas to be developed in the next months, the WUF 11 was a very successful event, and we are looking forward to the next WUF 12 in Cairo.