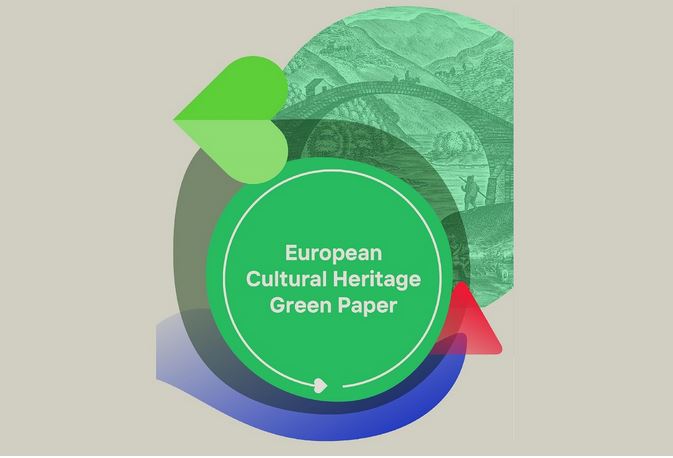 The European Cultural Heritage Green Paper is produced by Europa Nostra in close cooperation with ICOMOS and the Climate Heritage Network, with the input of other members of the European Heritage Alliance. It is supported by the European Investment Bank Institute and the Creative Europe programme of the European Union.

The document was presented by its Lead Author, Andrew Potts, Coordinator of the ICOMOS Climate Change and Heritage Working Group. He stressed that “The European Cultural Heritage Green Paper aims to integrate cultural heritage into climate action and inspire the mobilisation of the heritage community for transformative climate action. Holding global warming to below 1.5C is our best chance at sparing the planet, its people and their cultures from the worst impacts of climate change. The European Green Deal helps put the world on that path. The future of Europe’s cultural heritage depends on its success. At the same time, Europe’s shared values and common heritage offer undeniable potential to help accomplish the Green Deal’s mission. This is why cultural heritage is essential to the success of the European Green Deal”.

The Paper correlates the contribution of cultural heritage to all key areas of the European Green Deal,including Clean Energy, Circular Economy, the Renovation Wave, Smart Mobility, Farm to Fork, Green Finance and a Just Transition, Research and Innovation, Education and Training, as well as Green Deal Diplomacy. It proposes a series of concrete recommendations both for policy-makers and for cultural heritage stakeholders. Potential conflicts, real or perceived, between heritage safeguarding and European Green Deal action are also identified, as well as win-win strategies for overcoming these conflicts.

As a follow-up, Europa Nostra plans to launch a European multi-stakeholder platform on heritage and climate action, in order to build on and deepen the collective knowledge developed with this Paper and in order to engage all parties concerned into ensuring adequate implementation of the proposed recommendations. The European Investment Bank Institute has also announced the introduction of a new strand of its future activities dedicated to the topic “Cultural Heritage and Climate Action”.

The Paper was supported by the European Investment Bank Institute, a partner of Europa Nostra since 2013 notably with the 7 Most Endangered Programme. “We decided to support the European Cultural Heritage Green Paper because we believe cultural heritage has the potential to provide the missing link between all Europeans and the European Green Deal,” noted Francisco de Paula Coelho, Dean of the Institute.

In a video message recorded especially for the Green Paper launch event, Ambroise Fayolle, Vice-President of the EIB responsible for Climate Action, emphasised: “As Hermann Parzinger says: ‘whether we like it or not we are all intrinsically connected to our past’. In the same way, we are all intrinsically connected to the future of our planet. To safeguard our past, we need to safeguard our future as well. The EIB is supporting the European Cultural Heritage Green Paper because we believe cultural heritage has the potential to provide the missing link between all Europeans and the EU Green Deal and constitutes the basis of our common and greener future.”

This policy and advocacy document will also be highly relevant for other policy priorities of the European Union, such as the recently launched New European Bauhaus initiative of the European Commission, of which Europa Nostra is an official partner.

Reacting to the document, Mariya Gabriel, European Commissioner for Innovation, Research, Culture, Education and Youth, stated: ““The greening of Europe’s cultural heritage is an absolute necessity and provides an once-in-a-lifetime opportunity to make it more resilient and relevant. Let’s read, reflect and look at the European Cultural Heritage Green Paper in this light, to find common solutions and areas for cooperation. I stress once again our commitment to promoting and protecting Europe’s rich heritage in all its forms – tangible, intangible, cultural and natural. Together with the Member States and the sector’s stakeholders, we can continue to safeguard and develop this precious resource for future generations to come”.

The European Cultural Heritage Green Paper is the result of a fruitful cooperation between two of the oldest and largest heritage organisations in the world: Europa Nostra and ICOMOS. The recently elected new President of ICOMOS, Teresa Patricio, stressed: “Europe’s rich cultural heritage can support implementation of every element of the European Green Deal. Culture-based strategies can help heighten the ambition and capacity of communities to act, support climate adaptation and resilience, contribute to mitigation interventions to reduce greenhouse gas emissions, and address loss and damage from climate impacts. Cultural heritage is particularly central to Green Deal strategies focused on Europe’s urban and rural landscapes such as the renovation wave and the New European Bauhaus”.