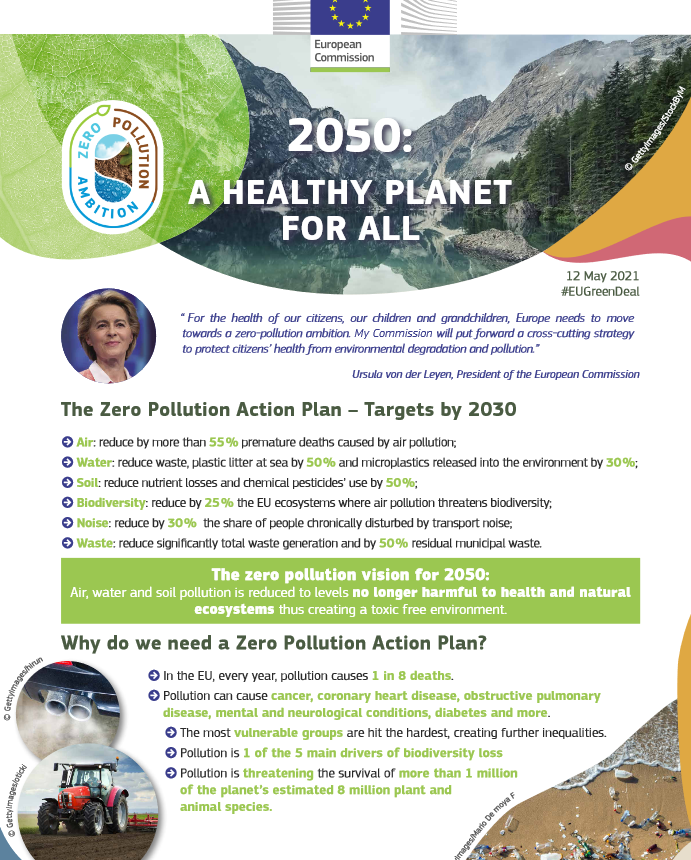 For the health of our citizens, our children and grandchildren, Europe needs to move towards a zero-pollution ambition. My Commission will put forward a cross-cutting strategy to protect citizens’ health from environmental degradation and pollution.”Ursula von der Leyen, President of the European Commission.

The Zero Pollution Action Plan – Targets by 2030
» Air: reduce by more than 55% premature deaths caused by air pollution;
» Water: reduce waste, plastic litter at sea by 50% and micro-plastics released into the environment by 30%;
» Soil: reduce nutrient losses and chemical pesticides’ use by 50%;
» Biodiversity: reduce by 25% the EU ecosystems where air pollution threatens biodiversity;
» Noise: reduce by 30% the share of people chronically disturbed by transport noise;
» Waste: reduce significantly total waste generation and by 50% residual municipal waste.

Why do we need a Zero Pollution Action Plan?
» In the EU, every year, pollution causes 1 in 8 deaths.
» Pollution can cause cancer, coronary heart disease, obstructive pulmonary disease, mental and neurological conditions, diabetes and more.
» The most vulnerable groups are hit the hardest, creating further inequalities.
» Pollution is 1 of the 5 main drivers of biodiversity loss
» Pollution is threatening the survival of more than 1 million of the planet’s estimated 8 million plant and animal species.