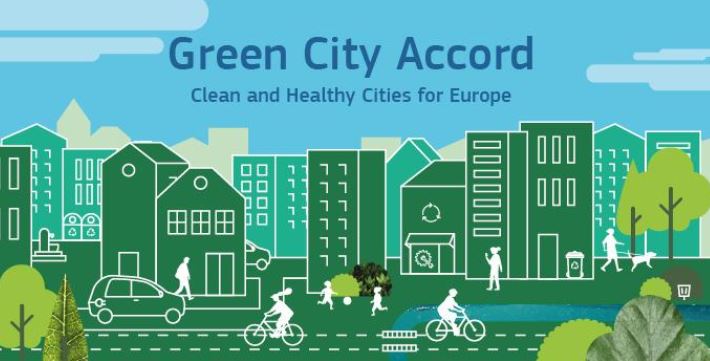 Green City Accord is a movement of European mayors committed to making cities cleaner and healthier. It aims to improve the quality of life of all Europeans, and accelerate the implementation of relevant EU environmental laws. By signing the Accord, cities commit to addressing five areas of environmental management: air, water, nature and biodiversity, circular economy and waste, and noise.

The Green City Accord was launched during the European Week of Regions and Cities and is open for mayors to sign.

What is the Green City Accord?

Cities are critical to meeting the EU’s environmental objectives. Many successful actions have already been taken at city level, but further efforts are necessary to tackle rising environmental challenges.

” By 2030 cities will be attractive places to live, work and invest in, and will support Europeans’ health and well-being. All Europeans will breathe clean air, enjoy clean water, have access to parks and green spaces, and experience less environmental noise. The circular economy will become a reality and waste will be minimised thanks to greater reuse, repair and recycling.”

Signatory cities will commit to tackling the most urgent environmental challenges facing their cities. By joining the Accord, mayors agree to step up their efforts in five key areas by 2030:

In each of these areas, signatories commit to:

Why cities should join?

By signing the Green City Accord, cities will become part of a growing movement to safeguard the natural environment and improve the quality of life of Europeans. Cities will also be supporting the European Green DealSearch for available translations of the preceding linkEN••• and the delivery of the Sustainable Development Goals.

In particular, cities will:

The Green City Accord is open to any city located in the European Union. The term “city” means an urban area with an administrative unit governed by a city council or another form of democratically elected body. This includes large metropolitan areas, as well as agglomerations.

Cities in European Economic Area countries and in Switzerland will be able to join in the second phase. Other cities in the wider European region may be eligible to join at a later stage.

The Green City Accord can be signed at any time. Please note that only the Mayor (or equivalent representative) can sign.

There are only two steps to become a signatory: