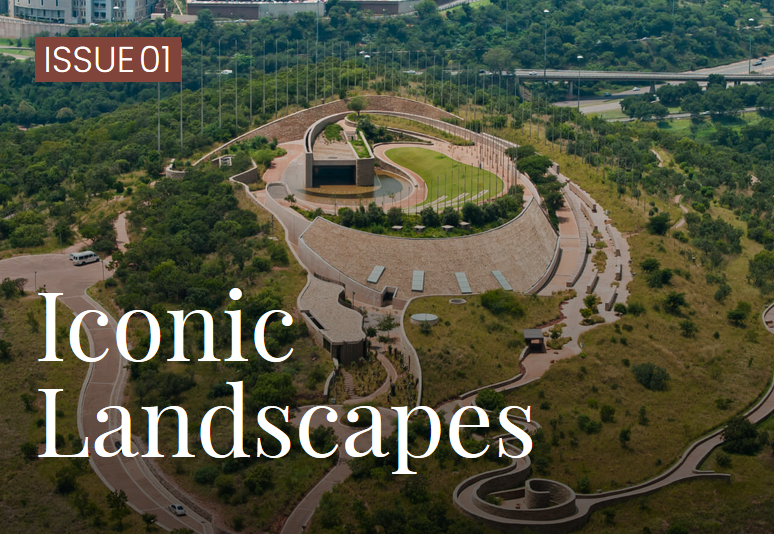 We are proud to inform you that the first issue of the AFRICAN JOURNAL OF LANDSCAPE ARCHITECTURE is now live.

Certain landscapes, natural or man-made, evoke deeply profound thoughts and feelings, and can alter the way we understand ‘place’. These landscapes are often rich in form, narrative and inspire a special significance to a particular society or individual. They are ‘iconic’ in that they can mean, evoke, sometimes even symbolise more than just another place. Iconic landscapes could be natural, cultural, historical, or even urban landscapes, e.g. Stone Town on Zanzibar, Table Mountain in Cape Town, or designed landscapes such as Freedom Park in Pretoria.’

Background to the Journal

In August 2014 a group of landscape architects met in the offices of OvP Associates in Cape Town. Their intention was to found a landscape architecture journal that would better reflect the true scope and depth of the profession through incisive articles, including those of an academic or research nature, the idea being that the journal would be the official publication of the Institute of Landscape Architecture in South Africa (ILASA).

The feeling was that existing journals at the time were more orientated to the landscape trade industry and were not a good reflection of the greater role of landscape architects in addressing environmental and social issues. There was also a need to have a medium where conference papers and even peer-reviewed articles could be
published.

Despite the initial enthusiasm, the initiative ran out of steam, partly due to those involved being already extended in their own practices or with teaching, along with the perennial problem of funding such an initiative on a sustainable basis.

In February 2018 discussions were held with the University of South Africa (UNISA) by members of ILASA around the idea of having a landscape journal orientated more toward scientific, peer-reviewed articles that could attract authors from across the globe. However, ILASA, although supportive, understandably did not have the appetite to guarantee funding to UNISA for such a journal and this initiative fizzled out quietly as well.

In September 2019, at the IFLA World Council meeting in Oslo, Bernard Oberholzer approached Carey Duncan, President of IFLA Africa, with the idea of having a landscape journal that served the whole of Africa and not just South Africa. The idea was met with enthusiasm, and Bernard, together with Graham Young, Secretary General, IFLA Africa, who had retired from full-time teaching at the University of Pretoria, took on the project, supported by an editorial panel comprising academics and practitioners from across the continent.

The timing of the journal is propitious. The IFLA Africa Region has published its African Landscape Convention – a declaration of fundamental principles to support stewardship of the African landscape, an African Landscape Network has been formed, and IFLA Africa is active in supporting new institutions of landscape architects in several African countries. The new journal could therefore play an important unifying role in these initiatives across the Continent.

This first issue of the African Journal of Landscape Architecture and the hosting of the journal website were generously funded by IFLA World, and the design of the website was carried out on a pro bono basis by Jacques Oberholzer of Now Boarding Digital. We are also indebted to Carey Duncan for assistance with the French translations.

It is hoped that this issue will be a wellspring for many issues to come, providing a useful forum for landscape architects and related disciplines in both practice and academia.

This issue on ‘Iconic Landscapes’ includes a paper on Landscapes of Emancipation by Graham Young in which he recalls the evolution of the Freedom Park and the Mpumalanga Government Complex projects and their role in a newly democratic South Africa.

Articles in this issue

Gareth Doherty compares an ‘undesigned’ Osun Sacred Grove with an architect-designed Nelson Mandela Freedom Park, both north of Lagos, and argues for an acknowledgement of indigenous landscape design.

Mohammad Falaki and Nadir Nasidi of Nigeria discuss the effect that colonialism has had on the traditional / cultural landscape of Kano, particularly its public spaces, and the contrast with the old walled city.

Liana Jansen shows us how to ‘read’ the landscape, and its many meanings, through the eyes of early inhabitants at Biesje Poort, near the South African border with Namibia. These meanings transcend the physical and the more abstract inner landscape.

Johan van Papendorp and Penny Moir discuss the design evolution of one of the Cape’s iconic wine farms from the time of early settlement to the present day, and the way the design has adapted in a series of layers to the local setting.

In a final commentary, Bernard Oberholzer talks of the hidden hand of the designer, where design evolves from the power of the place, as illustrated in landscape projects on Table Mountain, and at Cape Point and Cape Agulhas, the southern tip of Africa.