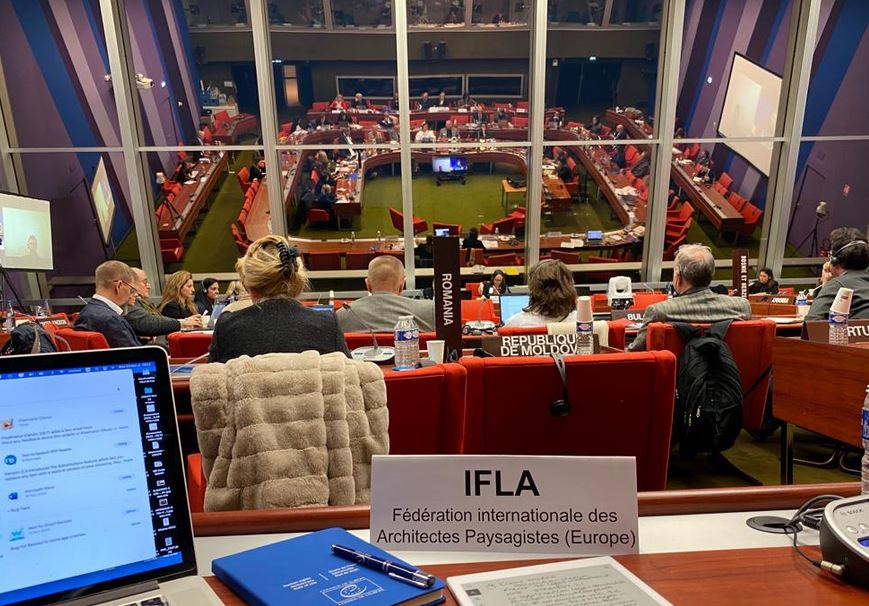 The Steering Committee for Culture, Heritage and Landscape (CDCPP) Council of Europe brings together the work of the Directorate General of Democracy and makes recommendations to the Council of Ministers. IFLA Europe was represented by Michael Oldham, Chair of the IFLA EU CoE Working Group.

The work of the department is complex and varied but falls mainly under the three headings - culture, heritage, and landscape. Unusually, the proceedings were introduced by the Director General who explained that because of financial constraints certain structural changes would be taking place within the administration.

Unfortunately, the post that Maguelonne Dejeant-Pons had previously occupied as Executive Secretary of the Landscape Convention will not be replaced as such. There was clearly some concern as to what the immediate effect of this might be but one advantage that may accrue from this change is that a more integrated approach might result. Nevertheless, there is also the possibility that landscape will figure less as many of the member states representatives are inevitably from culture and heritage backgrounds. Another effect of a reduced budget may be an increasing reliance on professional NGO’s to provide experts in certain areas. However, the Landscape Convention programme for 2023 still stands and includes the adjudication of projects for the European Landscape Awards (April), the Conference of the Landscape Convention on the 25-26 May, and a workshop in the autumn (October).

A variety of reports were presented to the meeting including a response to the Conference of Ministers of Culture (April 2022) – Declaration on the Russian Federation’s aggression against Ukraine. This response concentrated on heritage with some regard to culture but sadly with no regard for landscape, which seemed odd. The devastation caused by the bombardment of towns and cities will inevitably require a significant response in terms of rebuilding and part of this must include landscape considerations. The point was made at the meeting; hopefully future documents will be more balanced. The need to set up a wide-ranging Commission for the Ukraine is obvious, but funding for the CoE would be a major problem.

The report on the last years activities of the Landscape Convention was very comprehensive and the extent of the work formidable after a need to concertina events following the constraints imposed by COVID. We were reminded of the call for landscape projects to be submitted before the end of January 2023 for the awards and raised the possibility of a landscape architect being appointed to the jury. The need for a more coordinated/integrated approach for culture/heritage and landscape management was also remarked on.

The 2023 autumn workshop on the theme of ‘renewable energy and the effect on landscape’, title to be finalised, will probably take place in Spain in October. A request has been made to avoid any possible conflict of dates with the IFLA EU General Assembly.

Elections were conducted for the CDCPP Bureau. This is the last year for Krisztina Kinces, (Hungary) as a bureau member. As a landscape architect, her inclusion was particularly important. Gilles RUDAZ, (Switzerland) the chair of the Conference of the Landscape Convention was appointed, hopefully he will look after our interests. The new chair of the CDCPP Bureau is Mr Terje Birkrem HOVLAND - Norwegian Ministry of Climate and Environment.

A full report of the meeting will appear on the Council of Europe’s CDCPP website in due course.