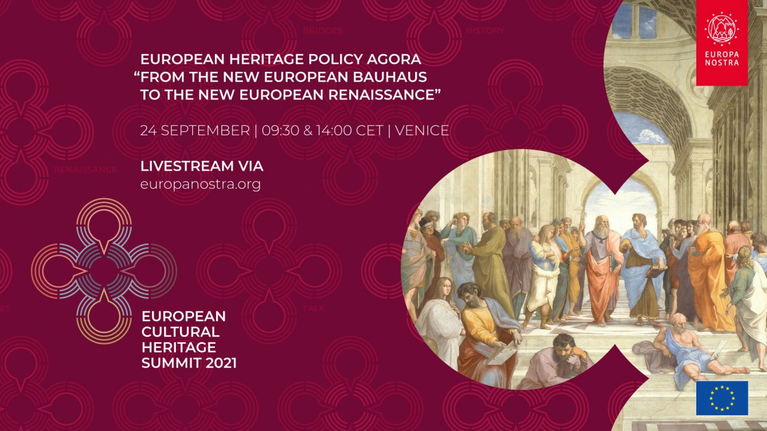 The European Heritage Policy Agora “From the New European Bauhaus to the New European Renaissance” takes place today (09.30-13.15 |14.15-16.30) at the headquarters of the Giorgio Cini Foundation in Venice. The Agora will bring together policy-makers at all levels as well as key heritage stakeholders in a series of high-level debates on the most topical issues for the cultural heritage ecosystem in Europe.

The Agora is a contribution to the New European Bauhaus, of which Europa Nostra is a civil society partner. It is based on the firm conviction that, while we jointly promote a New European Bauhaus, we also ought to aspire to a New European Renaissance: one shall indeed lead to the other. The Agora also coincides with and contributes to another citizen-driven initiative launched by the EU institutions, namely the Conference on the Future of Europe. It is Europa Nostra’s response to the call for organising citizens’ debates on the future of Europe in heritage sites issued in association with the European Heritage Alliance on 9 May 2021 - Europe Day.

Aiming at connecting these various initiatives, the Agora is a fitting occasion to discuss and demonstrate the role of cultural heritage in achieving all the policy priorities of the EU
- from social cohesion to sustainable development and climate action, and from the protection of fundamental values to enhancing Europe’s role in the world.

The European Heritage Policy Agora is one of the highlights of the European Cultural Heritage Summit 2021, which is being held this week in the World Heritage City of Venice. It is organised by Europa Nostra with the support of the European Union as well as in collaboration with other European and Italian partners. The Summit is held under the patronage of the European Parliament, the Slovenian Presidency of the Council of the EU and the Italian Ministry of Culture.

Q&A with the audience

12:00 – 13:15 Cultural Heritage, a catalyst for peace and mutual understanding

Q&A with the audience

Silvia Costa, Extraordinary Commissioner for the Italian Government for the restoration of the Santo Stefano prison, former MEP and Chair of the Culture and Education Committee of the European Parliament (Italy)

André Wilkens, Director of the European Cultural Foundation (The Netherlands)

Nina Obuljen Koržinek, Minister of Culture and Media of Croatia

For more information, read the Agora Programme and the Agora Booklet.

This event is part of European Heritage Summit 2021 21 - 24 September, Venice

The European Cultural Heritage Summit 2021 in Venice is organised by Europa Nostra – the European Voice of Civil Society Committed to Cultural Heritage – with the support of the European Union and in collaboration with other European and Italian partners. The Summit is held under the patronage of the European Parliament, the Slovenian Presidency of the Council of the EU and the Italian Ministry of Culture. For full programme please visit https://www.europanostra.org/european-heritage-summit/