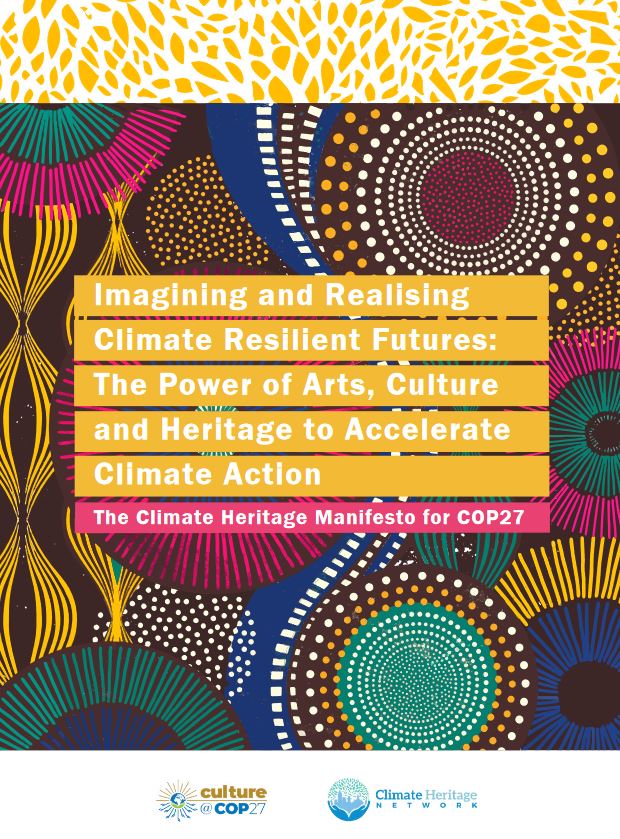 The Climate Heritage Manifesto for COP27

Imagining and Realising Climate Resilient Futures: The Power of Arts, Culture and Heritage to Accelerate Climate Action - The Climate Heritage Manifesto for COP27

Climate change is having a profound impact on people and planet. We are witnessing long-lasting and irreversible effects. Avoiding the worst of these requires limiting global temperature increase to 1.5 degrees above pre-industrial levels. Yet the world is failing to meet even the Paris Agreement’s 2 degrees temperature goal, with current Green House Gas (GHG) concentrations now the highest ever recorded. This impact is already noticeable by all of us.

Today, it is increasingly obvious that the existence of humans on Earth is profoundly at risk from human-caused climate change and the climate inaction that is deepening, year after year, the climate crisis. Scientists have found that 9 of the 15 known Earth tipping elements that regulate the state of the planet have been activated, and there is now scientific support for declaring a state of planetary emergency (Intergovernmental Panel on Climate Change, 2021, 2022).

UN Secretary General Antonio Guterres has called the status quo a “damning indictment of failed climate leadership.” A growing critique of climate planning and policy which attributes this failure, in part, to the scarcity of social imaginaries capable of conceiving plausible low carbon, just, climate resilient futures; a climate policy ecosystem that validates technocratic approaches while marginalizing alternative strategies; and the need to better include diverse voices and perspectives in climate governance. We believe that culture from arts to heritage, with its power to help people imagine and realize low-carbon, just, climate resilient futures is a missing force that can address these shortcomings.

We represent institutions and organizations committed to shifting the obsolete mindsets and paradigms- unlocking the potential of arts, culture, and heritage to fully achieve the ambitions of the Paris Agreement. We recognize this must include transformation within the culture sector too, embracing sustainable practices and
stewardship; lifting up the voices of underserved communities and mobilizing solidarity with frontline communities. We must preserve, record, and make culture and heritage available in inclusive ways, including through traditional and innovative artistic forms as well as new technologies.

The work of cultural actors is still underused, under-developed. We have to be fully mobilized for climate action. We are artists, anthropologists, archaeologists, architects, landscape architects, administrators, archivists, crafts persons, conservators, curators, engineers, geographers, historians, librarians, musicians, museologists, writers, performers, urban planners, and site managers, as well as scientists, researchers, teachers, and scholars, and bearers of Indigenous knowledge. Our unique insights stand ready to be applied to climate change or accounted for in climate science or resilience science, although, of course there are many great and pioneering examples; see for example the case-studies of the UCLG – CHN report “The role of culture in Climate-Resilient Development”, 2021.

The accelerating impacts of climate change are causing wholesale disruption to communities, and to and the historical and social fabric that underpins resilience globally, but disproportionately in the global south. Physical and economic impacts are exacerbated by the loss of underpinning culture and heritage - both tangible and intangible.

For the first time, the parties to the UN Climate Convention have acknowledged the critical linkages between cultural heritage and climate change.

In a series of ground-breaking decisions taken early this morning, national governments meeting in Egypt as part of COP27 have included cultural heritage in statements on both loss and damage and adaptation.

A new initiative announced earlier in the week, SURGe, puts culture at the centre of urban resilience. Championed by the Climate Heritage Network, the inclusion of culture and heritage in these decisions shows that the critical cultural dimensions of climate change are increasingly being recognised.

The Climate Heritage Network hails the explicit attention paid to cultural heritage in the COP27 cover decision, the Sharm el-Sheikh Implementation Plan (SHIP). The reference is included within a historic agreement, three decades in the making, to set up a Loss and Damage Fund. Taken on African soil, this is the first step in a process to rectify the systemic injustice to billions of people, particularly in the Global South, who are the least responsible for, but are on the frontlines of, the climate crisis.

The SHIP language adopted today “notes with grave concern” the growing gravity, scope and frequency in all regions of loss and damage associated with the adverse effects of climate change, resulting in devastating economic and non-economic losses, including forced displacement and impacts on cultural heritage, human mobility and the lives and livelihoods of local communities, and underlines the importance of an adequate and effective response to loss and damage.

COP27 also took the important decision to include “tangible cultural heritage” as a theme of the new framework adopted for the Glasgow-Sharm el-Sheikh work programme on the global goal on adaptation. That same decision also establishes traditional knowledge, knowledge of indigenous peoples and local knowledge systems as a cross-cutting consideration. The CHN stands ready to cooperate in the elaboration of the Global Goal on Adaptation framework adopted today.

The Sustainable Urban Resilience for the Next Generation (SURGe) Initiative, one of several led by the COP27 Presidency, was launched earlier in the week. The Initiative, which counts “locally-led and culture-positive” action as one of its guiding principles, aims to support customised approaches depending on local contexts of rapidly developing cities, while recognising that culture and heritage represent both an asset to be protected from climate impacts and a resource to strengthen communities’ transformative change.

These three decisions are a clear victory for the members and partners of the Climate Heritage Network across the globe, who made these issues a priority. COP27 saw an unprecedented engagement by cultural voices from arts and heritage. Events in the COP27 protest zone and the Green and Blue Zones, as well as the #ArtCultureHeritageCOP27 and CultureCOP Assembly, lifted up culture in climate action and policy like never before.

The ground-breaking recognition of the linkage between cultural heritage and climate change at COP27 follows increasing engagement by the Intergovernmental Panel on Climate Change (IPCC) with culture and heritage, and with the valorisation of diverse knowledge systems, as reflected in the 2022 contribution of IPCC Working Group II to the IPCC Sixth Assessment Report, and the International Meeting on Culture, Heritage and Climate Change co-sponsored by the IPCC, ICOMOS and UNESCO, which was held in December 2021.

CHN members know first-hand that culture and heritage along with Indigenous and local knowledge systems are already experiencing loss from both slow and rapid onset hazards (and also sometimes maladaptation and mal-mitigation). While lauding the due reference of cultural heritage in the loss and damage cover decision, the Climate Heritage Network regrets the reduction of cultural heritage to merely an element of loss. Queen Quet of the Gullah/Geechee Sea Island Coalition, a founding CHN member, spoke in Sharm el-Sheikh for many when she said: “We don’t want to be defined by Loss and Damage. Why not call us by what we are: cultural heritage communities.” Her remarks were delivered at an event held earlier in the week in the COP27 Resilience Hub entitled “Losing the Irreplaceable: Loss & Damage, Culture & Heritage.”

The CHN also notes the paradox of COP27’s attention to loss and damage to cultural heritage, even while it failed to reach agreement on the fair and equitable phaseout of the fossil fuels that are causing this damage. Said CHN Coordinator Andrew Potts: “Make no mistake: mitigating the risk of loss and damage to culture and heritage through the implementation by all nations of a precautionary approach that pursues pathways limiting global warming to 1.5°C, with no or limited overshoot, must be of paramount concern to everyone who cares for culture and heritage.”

A more holistic treatment of the cultural dimensions of the climate crisis was at the heart of “The Sharm El-Sheikh Declaration on Culture-based Climate Action” proposed at COP27 by the CHN with the endorsement of Jordan. The Declaration stresses that culture, from arts to heritage, plays a fundamental role in helping people to imagine and realize low carbon, just, climate resilient futures and that culture-based climate action has a crucial role to play in meeting the objectives of the UNFCCC, including also those related to mitigation and promoting climate-resilient sustainable development. The Declaration was discussed during a landmark High Level Ministerial Dialogue on Cultural Heritage-Based Climate Solutions held Thursday with the support of Egypt.

The Climate Heritage Network will build on this momentum, including the Ministerial Dialogue, and work throughout the year to scale-up culture-based climate action and to win more holistic recognition of the culture-dimensions of the climate crisis and the responses to it at COP28 in the United Arab Emirates in December 2023.

Said HRH Princess Dana Firas, UNESCO Goodwill Ambassador, Petra National Trust President, and Chair of the CHN’s Culture at COP27 Working Group: “Although we have made significant progress in mainstreaming culture and heritage in the climate agenda at COP27 in Sharm El Sheikh, our work continues. We aim to build upon the Declaration, and achieve explicit mention and recognition of cultural heritage not only as a sector that is impacted by climate change but also to include culture-based solutions as integral to successful and meaningful climate action. We aim to redouble our efforts as we work towards COP28.”