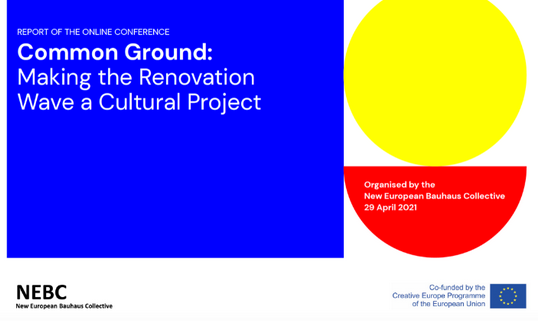 The NEBC publishes the report of its conference : “Common Ground: Making the Renovation Wave a Cultural Project”.

On 29 April 2021, members of the NEB Collective organised an online conference in order to contribute to the co-design phase of the New European Bauhaus. In the spirit of the New European Bauhaus, this conference was designed to be a participatory and multidisciplinary event, enabling people from various academic and professional backgrounds to meet and exchange ideas on how to shape the NEB. The report summarises key learnings and findings of the conference.

The event explored culture as a key driver of quality in the built environment. It was an opportunity to debate how a holistic approach that considers and seeks to optimise drivers of sustainability, beauty, and inclusiveness can contribute to design and achieve better living spaces for the common good.

About the event
After the opening speech by the President of von der Leyen of the European Commission and keynote speeches, representatives from six citiesexchanged on how local public authorities can translate the NEB ambitions into concrete initiatives and projects. Another key part of the programme consistedof 11 breakout sessions, during which conference participants were invited to discuss specific issues and challenges relating to the New European Bauhaus:education, quality, bio-sourced materials, sustainability, research, mobility, heritage, and sense of place, to name but a few.

The NEBC event was attended by around 800 participants from various backgrounds: representatives from EU institutions, Member States, and local authorities; experts from the various bodies which co-organised this event, namely architects, spatial planners, landscape architects, interior architects, engineers, designers, artists, educators, and researchers of the built environment; and also professionals from the cultural and creative sectors. The event was organised with the financial support of the Creative Europe Programme of the European Union.

About the NEBC
The New European Bauhaus Collective - NEBC is a grouping of several pan-European organisations representing architects, spatial planners, landscape architects, interior architects, engineers, designers, artists, educators and researchers of the built environment, and more broadly the cultural and creative sectors. NEBC is an official partner of the NEB initiative.

The NEB Collective released in November 2020 a Statement Making the Renovation Wave a Cultural Project to express initial views on the New European Bauhaus and offer its support to the Commission.