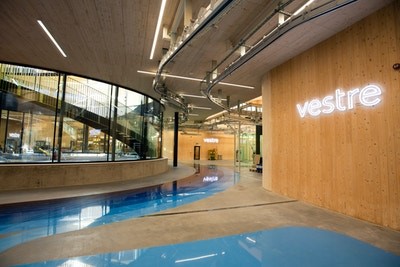 After less than 18 months of construction, Vestre has opened the doors to the world’s most environmentally friendly furniture factory. The Plus is the largest investment in the Norwegian furniture industry for decades. The factory will be a global showcase for sustainability and highly efficient manufacturing. With this, the town of Magnor on the Swedish border has gained both a factory and a tourist attraction.

“The Plus is a factory for the people! This is a project we have put our hearts and souls into. This is an important day both for us, as well as for Norwegian mainland industry and Scandinavian export cooperation,” says Stefan Tjust, CEO of Vestre.

The factory was designed by distinguished architecture firm Bjarke Ingels Group (BIG), which designed Google’s headquarters and The Twist at Kistefos in Norway, among other things. The Plus is so named because it is shaped like a ‘plus’, and at the heart of the factory is a large experience centre which is open to both visitors and the public. The various stages in the production process take place in the four factory wings. The materials first enter a warehouse. They then continue on to lacquer production and timber processing, before all the furniture components end up in the assembly department and are prepared for delivery in Norway and the rest of the world.

The building is surrounded by an extensive recreation area and a network of paths. Anyone following the paths can stroll around the factory and see the green roof covered with natural forest vegetation, and the nearly 900 solar cell panels that supply energy to the building.

“The Plus will be an attraction, both for locals and visitors, where people can come and see how a modern factory can be built and run in a sustainable way,” says Tjust.

Sustainability and openness have guided every aspect of the factory – from the design of working conditions to the accommodation of electric heavy goods vehicles and the management of the surrounding forest. Together, Vestre and BIG have thereby created an entirely new typology, where people, production, technology, architecture and nature are completely integrated in each other.

The Plus is well-placed to become the world’s first project of its type to achieve the highest BREEAM environmental classification: “Outstanding”. The factory has been built as a ‘plus house’, which means that the building’s energy consumption is 60 percent lower than equivalent conventional factories, while releasing 55 percent less greenhouse gases than similar buildings. If you include the manufacturing equipment in the equation, energy consumption in The Plus is reduced by 90 percent.

“With The Plus, Vestre has shown that it is possible to invest heavily in profitable and environmentally friendly finished goods production in a high-cost country such as Norway and we believe that if we can do it, so can others. The goal is for the project to inspire others to establish similar projects. We hope that The Plus will be a strong symbol and create a significant ripple effect both for Norwegian mainland industry and exports and for Scandinavian cooperation,” says Tjust.

Vestre has invited more than 800 guests to a forest festival for the official opening of the factory. Performers will include Norwegian singer Dagny, who has been streamed over 450 million times, and Swedish band The Mamas.

“It’s incredible to finally be able to open the doors to everyone who wants to come and experience the factory. It feels good to complete this extensive project – despite the pandemic and unforeseen events, we have essentially completed it on schedule. We achieved this through a fantastic combined effort and advice from all the local suppliers who have been involved in the project,” says Tjust.

Vestre’s goal is not just to attract tourists, but also to help Magnor and Innlandet attract more leading Norwegian industries. Partly thanks to its location so close to Sweden, Magnor has always been a hub for industry development across the national border.

“We hope that The Plus will enable more companies to discover all the opportunities that exist here in Innlandet and in Magnor. The companies in Norwegian mainland industry need to work together to bring out the best in each other, so it would be great if more Norwegian companies chose to move their production here,” says Tjust. “There’s certainly plenty of room here for more!”

Read more about the project and discover the new The Plus university at www.theplus.no/en/

Take the tour with Stefan Tjust, CEO of Vestre https://www.facebook.com/vestrefurniture/videos/764766704652920