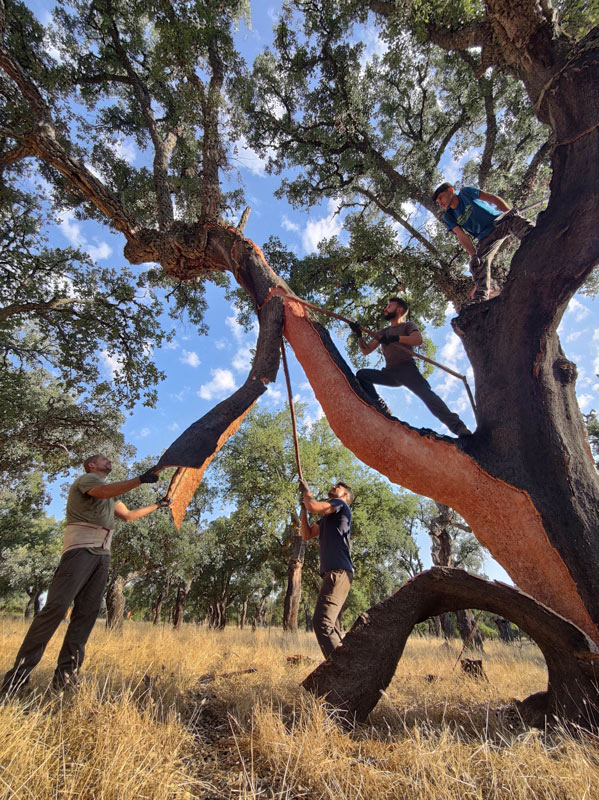 The winner of IFLA Europe Rural Landscape photo competition is Álvaro Casanova from Spain with his photo Corkage in dehesas of extremadura with 70 points.

Agricultural Landscapes take up 39% of European lands, presenting a palimpsest of human interaction with nature and creating an extensive ‘green infrastructure’, when sustainably cultivated, with socio-ecological impact to everyday lives of people. Yet, these valuable landscapes, often in close relation with urbanised lands, do not receive the acknowledgement, the ontological planning and the design they deserve. Unknown to most of citizens, the agricultural landscapes are seen as a background of holidays, many times idealised as ‘scenery’ and therefore, Landscape Architects are committed to take actions towards their recognition as productive, important to produce ecosystem services and also recreational valuable place on earth.

IFLA Europe Agricultural Landscape Working group invited professionals and non-professionals to submit images of their ‘idealised’ but also of their everyday agricultural landscapes in an attempt to include as many stakeholders as possible!

Participants from all over Europe were asked to submit a photograph representing the main characteristics of the traditional agricultural/forestry/livestock landscape and seascape. “Traditional” is meant as a sustainable, important for the identity of the local communities, their sense of belonging to the places, productive landscape, expression of the co-evolution between men and environment and of the relationship nature-culture. The cultivating/producing technique must be briefly described (max 300
words), and the relation between local community and landscape.

- Cultures, Value systems, Recreational Values and Social Organisations
Cultural identity and sense of place are embedded in and belong to specific agricultural sites. Social organisations, value systems and cultural practices associated with resource management and food production may ensure conservation of and promote equity in the use and access to natural resources. Such social organisations and
practices may take the form of customary laws and practices as well as ceremonial, religious and/or spiritual experiences.

- Landscapes and Seascapes Features
Landscapes or seascapes that have been developed over time through the interaction between humans and the environment, and appear to have stabilized or to evolve very slowly. Their form, shape and interlinkages are characterized by long historical persistence and a strong connection with the local socio-economic systems that produced them. Their stability, or slow evolution, is the evidence of integration of food production, the environment and culture in a given area or region. They may have the form of complex land use systems, such as land use mosaics, water and coastal management systems.

The judges looked for a creative, engaging and inspiring submission. The entries were judged on following criteria:
- Relevance of the entry to the competition topic
- Significance level and uniqueness of the rural landscape submitted
- Creativity expressed through the photo and the description

Award:
1st Prize: 500 € and a comprehensive article including additional images and documentation of the context of the awarded images which will be published on the IFLA Europe website and social media.

2nd - 5th Prize a comprehensive article
including additional images and documentation of the context of the awarded images which will be published on the IFLA Europe website and social media.

The awarded image as well as shortlisted photographs will be published as postcards with additional information about the context of the image. IFLA Europe takes the opportunity to thank all the participants as well as Jury members. A catalogue of all entries will be prepared and published on IFLA Europe website.